The Legend of Last Mountain When the Great Chief of the world completed the building of all the hills, he found he had a little material left over and he looked about to see where he should put it. He saw that the prairie lay smooth and level and for many days journey, unbroken by mountain, lake or stream. “What fitter place than this to lay good soil?” he said, and in the midst of the prairie he built a mound with what dirt remained and, scooping a hollow with his hand, he made the water left over from the rivers a long lake. And he breathed on it so that the grass and trees grew, and the birds and buffalo came to rest in the shade. All that was wanting was a name, so the Great chief lifted up his voice and summoned all his braves and they came on wings like the eagle, greeting their chief with a shout like thunder booming among the hills. Then from their ranks stepped Cheewana, daughter of the great chieftain, beautiful as the summer morning, wise as a beaver and she bent at his feet. And she said, “Because this mountain was the last of thy making and this lake is the last of thy filling, I offer you for the one the name of Last Mountain and for the other that of Last Mountain Lake.” **Published by William Pearson Publishing Company Ltd. of Winnipeg in the approx. year of 1911, from a pamphlet called “Last Mountain Lake Saskatchewan’s Summer Resort**” 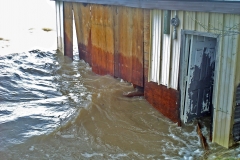